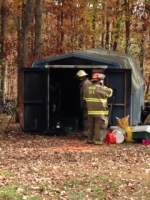 Hook & Ladder Softball Tournament will be hosted by the Meherrin Volunteer Fire & Rescue on October 20-21 of 2018. Anyone who is interested in putting a team together in the tournament please ...
Read more »
UTV Purchase
Thu. Jul 12th 2018

During Tuesday night monthly meeting members voted to add another tool to better serve the community of Meherrin and the surrounding areas. We voted to sell our back up Medi unit Medic 5-2 which is al...
Read more »
New Engine Purchase
Thu. Jul 12th 2018

Members with the Meherrin Fire/Rescue have put countless hours to remodel the engine that we have purchased from the Farmville Fire Department and it has been in service for the last 6 months. This pu...
Read more »
Farmville Moose Lodge Make Donation
Sun. May 4th 2014
On May 4th, Asst, Chief Pyle and Engineer Nash were on hand at the Farmville Moose Lodge to receive a $500 donation on behalf of the department. The Moose Lodge made several donations to area fire and...
Read more »
CFS Makes Donation To MVFR
Fri. Nov 1st 2013
CFS (Container First Services) made a donation to all Lunenburg County Fire & Rescue services. CFS recently purchased the Lunenburg County Landfill and its dumpster operations, with a $50,000 dona...
Read more »
About Us
History of Meherrin Volunteer Fire Department
The Meherrin Fire Department, Inc. was organized by the local citizens of 1954. In the beginning, the department had a 1937 Ford Fire Truck which was housed in W. R. Berry, Jr.’s one bay garage. One year later, the members of the department purchased the Meherrin School Building from Lunenburg County for its firehouse at the price of $4,000.00.
In 1959, our ability to perform was enhanced when the company purchased its second piece of equipment: a 1946 Ford with a gasoline transport tank mounted on it. This became our tanker and remained as our tanker until 1963 when the department purchased a 1963 Ford with a 1,000 gallon tank mounted on it.
1976 ushered in our first construction project when the department built a two-bay cinderblock building adjacent to the school building to house the first new truck the department had owned. This vehicle was purchased by Prince Edward County .
In 1985 the department purchased a 1985 GMC pumper to add to the fleet. Eight years later the department purchased their first crew cab pumper a 1993 International, which is still used as the first out truck on most calls.
On September 1, 1997 , Meherrin Volunteer Fire Department, Inc. became Meherrin Volunteer Fire & Rescue, Inc. and during that month construction was begun on the new building. Three months later, our existing firehouse, the old school building, was almost destroyed by fire and though our equipment was saved, some did experience some heat damage.
The department was fortunate enough to be able to begin rebuilding the old building while simultaneously working on the new one and in June 1999, we moved into the new building and the old building at the same time.
One month later in August of 1999 our responsibilities of being just a fire department were expanded. In August we added our first, First Responder, a first aid element, with the mission of stabilizing the patient until the Rescue Squad arrived. This was possible with the purchasing of a 1982 Chevrolet Van Ambulance from Victoria Fire & Rescue.
In 2001 we saw our responsibilities of being a First Responder expand once again. In 2001 we began Basic Life Support to local emergency rooms. This was possible with a grant received from the Office of EMS and funds raised by the department, by purchasing a 2001 Ford Osage Ambulance. Within a year, we expanded our services once more. In 2002 we became a licensed Advance Life Support ground transport agency.
Also in 2002 we were fortunate to be donated a 1991 Ford Ambulance from Charlotte County Rescue Squad. This unit proved to be a vital part asset to our fleet over the years it was in service. In 2006 this unit was sold to Prospect Volunteer Fire Department and was replaced with a 2005 Ford Osage Ambulance by help of a grant from the Office of EMS and funds raised from the organization.
In 2004 our department was fortunate to receive a grant from FEMA for purchasing all new turnout gear, wild land firefighting gear, cascade system, new high pressure air packs, and Hurst Extrication Tools, also know has “Jaws of Life”.
In 2004 we lost our 1985 GMC Pumper in a traffic accident while responded to assist Victoria . This unit was replaced in 2006 by a 2006 International Tanker. Also in that year we lost our 1993 Chevrolet Caprice in a traffic accident. This unit was also replaced in 2006 by a 2006 GMC Pickup.
Over the years our department has grown and we would like to take this opportunity to express our appreciation for the community support of both money and time extended over the year. Our growth is directly attributed to your support and the services we provide depends upon your assistance.
Becoming A Member

and serve our community.

Look under Files for membership classifications, guidelines, and an application.

You can also e-mail questions to membership@mvfrco5.org

or ask any member.

there is a potential for severe weather in your area.

The Code Red Weather app is a free download on both Android and Apple phones.

For Lunenburg County residents the below link is for you:

to be in compliance with Presidential Homeland Security Directive 5 that was put in effect after the September 11th, 2001 attacks in New York City.

The follow classes are all available online and free of charge through the Emergency Management Institute:

and further training in incident management and response training. 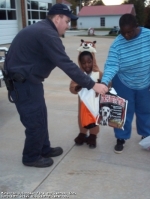 Copyright © 2006-2021. YourFirstDue Inc. All Rights Reserved. Designated trademarks and brands are the property of their respective owners. Content on this web site is supplied by Meherrin Volunteer Fire and Rescue, Inc.. YourFirstDue Inc. cannot be held responsible or liable for any content, text, pictures, or any other media found on this web site. Maintained by the members and staff of Meherrin Volunteer Fire and Rescue, Inc..
Management Login
Powered by